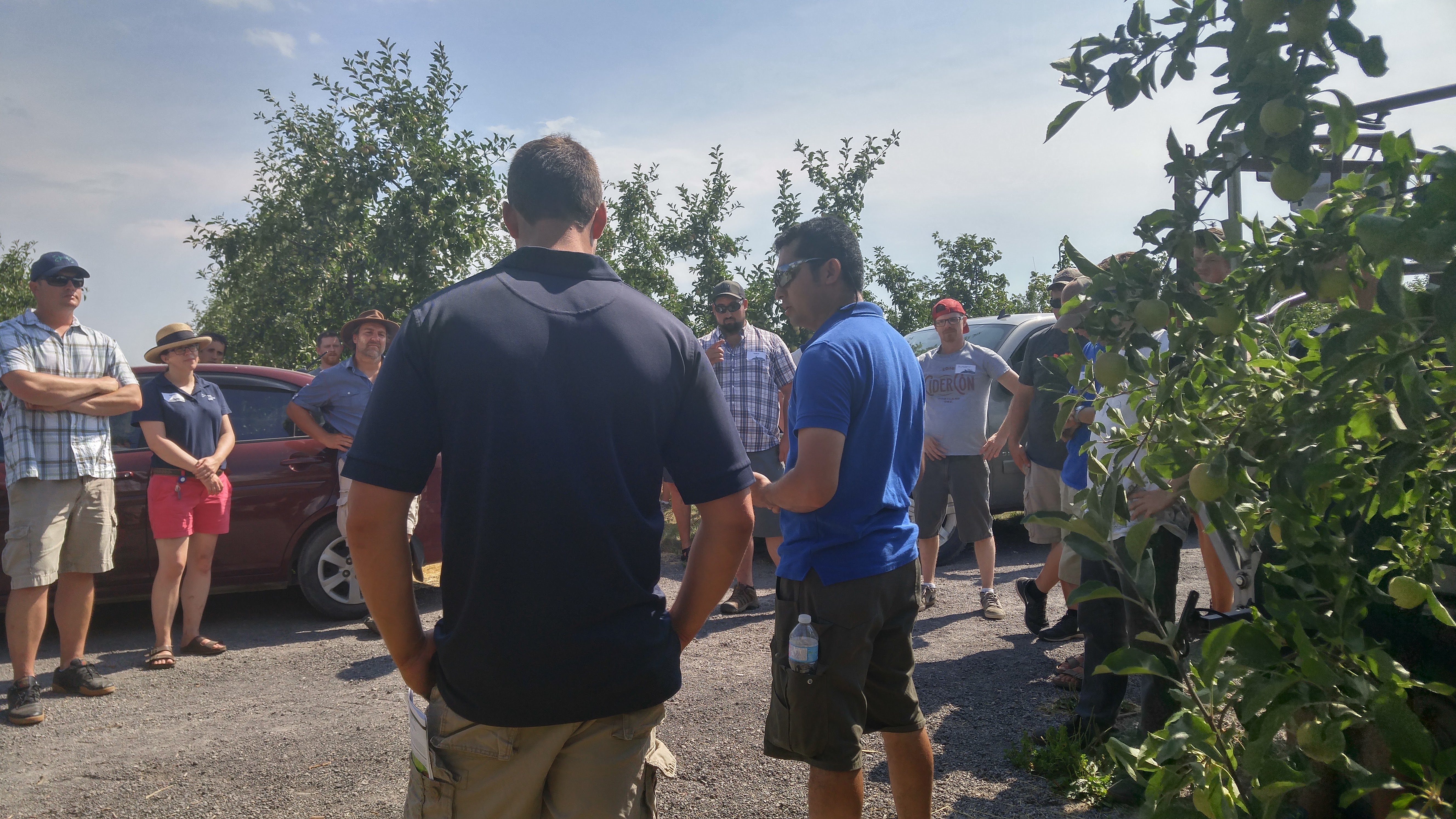 The learning curve is steep and the sheer volume of things you don’t know can seem overwhelming when you’re starting into something new – and apple growing is no different.

To help new apple growers with their start in the industry, Ontario Apple Growers general manager Kelly Ciceran and Leslie Huffman, former Apple Specialist with the Ontario Ministry of Agriculture, Food and Rural Affairs, came up with the idea of forming a group for young growers – both young in age and young in terms of length of time in the industry.

Gerbe Botden was part of the group’s first informal meeting one evening following the Ontario Apple Growers’ 2014 summer tour. He’s a second generation apple grower who farms with his parents in the Southern Georgian Bay area.

“Most members are under the age of 40, which is fairly young in our industry,” Botden explains.

Ian Parker of Wilmot Orchards near Newcastle was at that first meeting as well. He’s been in the apple industry for about five years, working alongside orchard owner Charles Stevens and orchard manager Robbie Montgomery.

“There’s a lot of knowledge in this group because a lot of guys are second, third or fourth generation apple growers. As a first generation grower, it’s good to know there are other young people I can ask questions of,” Parker says. “It’s an in-depth business to grow an apple and grow it well.”

Brian Rideout, a director on the Ontario Apple Growers board, is not from a farming background. He’s passionate about apple growing, though, and started farming with his father-in-law, a fruit grower on the shores of Lake Erie, 18 years ago.

“I don’t think you’re ever old to farming. I’m not a young grower but I still feel new and fresh to farming,” Rideout says.

Following that first meeting, a consultant with the Agri-Food Management Institute helped the group stay connected during the first year. When that funding ended, Rideout became the chair of the group, tasked with keeping it going.

“When there’s a conference or a meeting, we know each other and can share information freely,” says Botden, adding that he wouldn’t normally approach people he didn’t know to seek their advice.

The group organized its own summer tour this year, with young growers in eastern Ontario hosting their colleagues at Wilmot Orchards, Algoma Orchards, and Watson Farms.

“It’s often hard for young growers to get away for a day in the summer because they’re the ones on the front lines of the work,” Rideout says. “But orchards giving their young growers time to do this kind of stuff, that is priceless to us. It definitely pays off in the long run.”

The networking isn’t just limited to in-person encounters. A lot if it happens electronically through a What’s App group – and the ability for instant, constant communication with colleagues across the province is what members find particularly helpful.

“What’s App has been really handy – you can fire a quick question on there and people pipe up within minutes with answers,” says Parker. “And it’s not just information, it’s also help with contacts or getting products you need on the farm. It’s a really useful group for someone coming into the industry.”

“It’s amazing how quickly you’ll get an answer on What’s App. It helps us talk to each other quickly,” adds Rideout. “We had a cold day last year and within 15 minutes, we knew from Harrow to Newcastle what the temperatures were that day so we knew what we were dealing with in the orchard.”

If somebody has something in their orchard they have a question about – like a bug they can’t identify – a quick snap posted to the group will usually yield an answer, adds Botden.

All three agree the group, both electronically and in person, is an important way to strengthen the future of the Ontario apple industry. Group membership is approaching 50 people and includes industry partners representing input suppliers as well as government specialists with agronomic expertise.

“We benefit from helping each other grow the best crop possible,” believes Rideout. “We’re such a small industry but we want to help each other.”

“If we have to compete with each other as well as the rest of the world, it’s hard,” adds Botden. “But if we can work together, we can show our strength as an industry.”