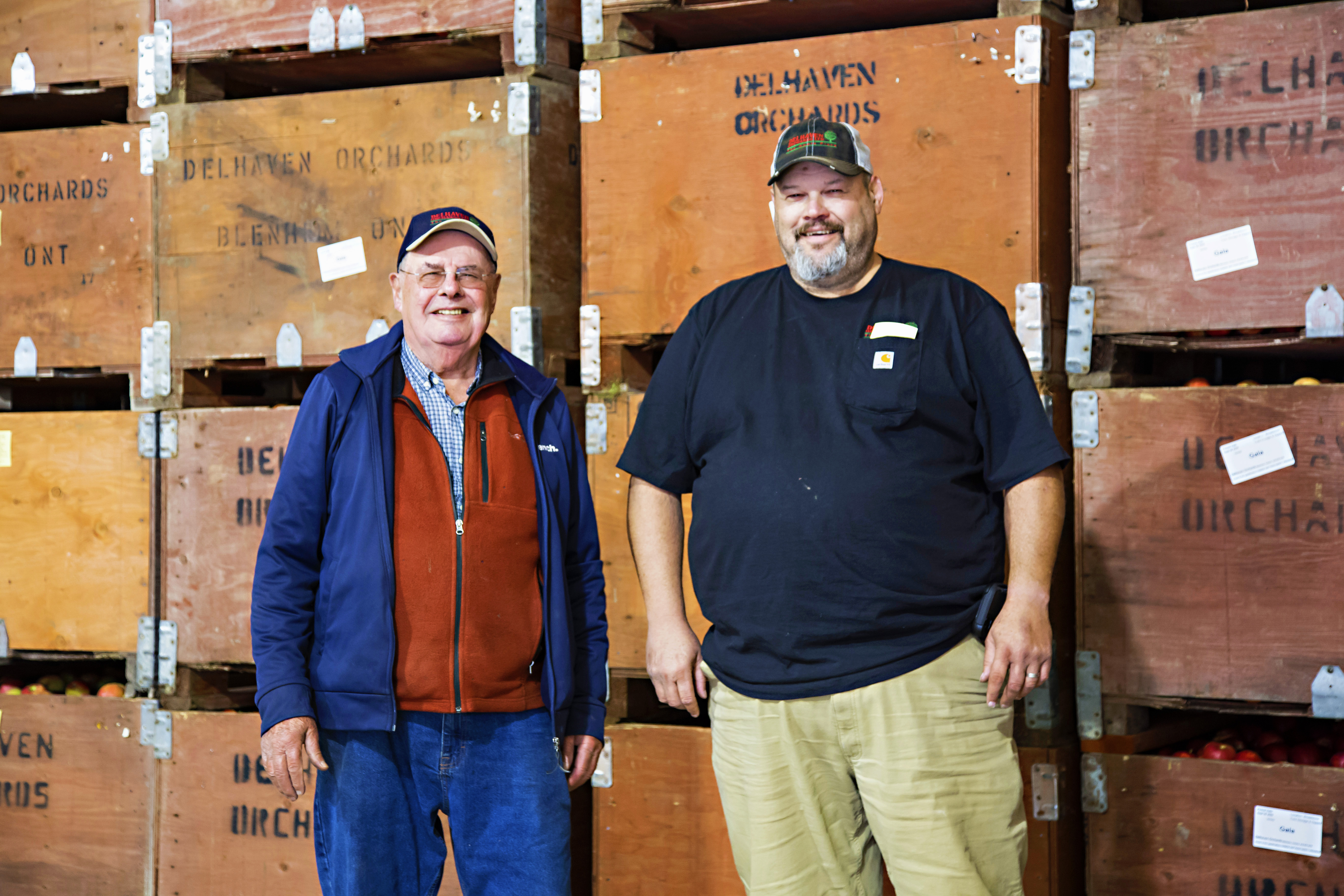 When Hector Delanghe first started farming, Louis St. Laurent was Prime Minister of Canada, the Yonge subway line in Toronto was newly opened, and construction had just begun on the St. Lawrence Seaway.

A lot has changed since then, not just in Canada, but also when it comes to fruit growing.

Hector, his wife Marilyn and their son Mark, a graduate of Ridgetown College, run Delhaven Orchards near Blenheim, Ontario where they grow a wide variety of fruit. The Delanghes also have two daughters who aren’t involved in the farm business.

Apples are their main crop, covering 85 of their 200 acres. The Delanghes grow 19 different apple varieties, which they sell as fresh fruit, primarily through their growing on-farm market, which is open 12 months of the year.

They also pack apples for independent markets, local farm markets, and some chain stores, but it’s the on-farm sales that Hector says provide the best opportunity to spread the word about apples.

“Farm market sales are a real opportunity to take time to talk to customers and to talk to the families who come out,” he explains. “They’ll ask what’s new and what apples taste good right now and we can make suggestions and explain how our fruit is grown. That’s the best way, that’s what brings people back.”

Another thing that could be bringing them back is the award-winning apple cider.

Delhaven Orchards has racked up top three finishes in every year of the sweet cider competition at the Ontario Fruit and Vegetable Convention since its inception in 2012, placing second in 2012, first in 2013, and third in 2014.

Their cider sales are growing 15 – 18 per cent a year and they use all of their own apples in their cider production, selling the finished product both through stores and their own on-farm market.

“We started making cider in 1976 when we had a hailstorm and didn’t know what to do with all the damaged apples,” he chuckles. “It has been well accepted and consumption is increasing.”

For Hector, the biggest change he’s seen in the six decades he’s been growing apples is the type and number of trees planted per acre of orchard.

When he first started in the business, his orchard had 35 trees per acre, with plenty of juice apples and not too much of the top quality production, or what is called “fancy” grade.

As their orchards expanded and trees were removed and replanted, the Delanghes started planting 70 trees to the acre, followed by 240 and then 450 – and today apple farmers are planting 1,000 trees per acre.

“Today we have smaller trees, we control their growth by pruning, and we get very good quality apples,” he says. “That’s where the money is and people will pay for quality. We still need apples for juice but that’s now a by-product.”

The Delanghes also grow more varieties of apples today than they used to, which Hector attributes to their farm market. It’s important to be the first on the market every year and to be able to meet various consumer needs.

After harvest, apples go into the Controlled Atmosphere storage facility on the farm, which helps to preserve their quality and lets the Delanghes market their apples year round.

“I’m very optimistic about the future of the apple industry. We have the methods to grow apples which give us the quality that will get us a good price, and with different equipment like harvesting platforms, we can decrease our labour costs,” he believes, adding that 41 cents of every dollar on his farm is spent on labour.

In addition to running his orchard business, Hector has long been involved in the horticultural industry. He is a past president of the Canadian Horticultural Council and the Ontario Fruit and Vegetable Growers' Association and was instrumental in the formation of the Labour Issues Co-ordinating Committee and the Seasonal Agricultural Worker Program.

In 2013, he was inducted into the Ontario Agriculture Hall of Fame, and was awarded the Badge of Honour for Long and Faithful Service by the Prime Minister of Jamaica for his commitment to the seasonal worker program.