Growing apples on a trellis 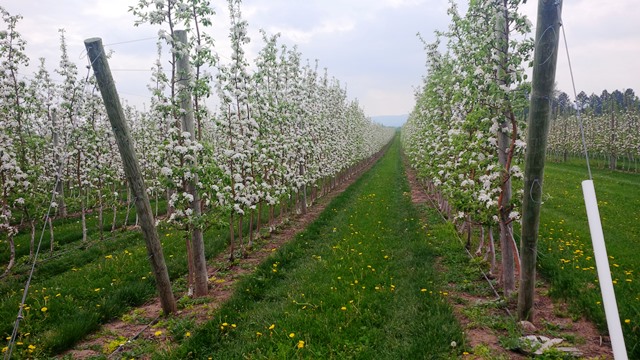 Growing apples on a trellis

When most of us imagine an apple orchard, we likely think of large trees with thick trunks and fruit-laden branches.

That used to be a common sight in Ontario, but today, you’re much more likely to see smaller trees growing close together and supported by a system of posts and wires – a little bit like what you might see in a vineyard.

This is called a trellis system and is used to support apple trees while they’re growing so that they can direct their energy into producing fruit rather than growing a strong trunk that would normally let them withstand wind and weather.

“Using a trellis system lets trees start producing fruit earlier, usually with some crop already starting to be produced in years two and three after planting rather than later on,” explains Hugh Fraser, Agricultural Engineer with the Ontario Ministry of Agriculture, Food and Rural Affairs (OMAFRA).

There are other advantages too. 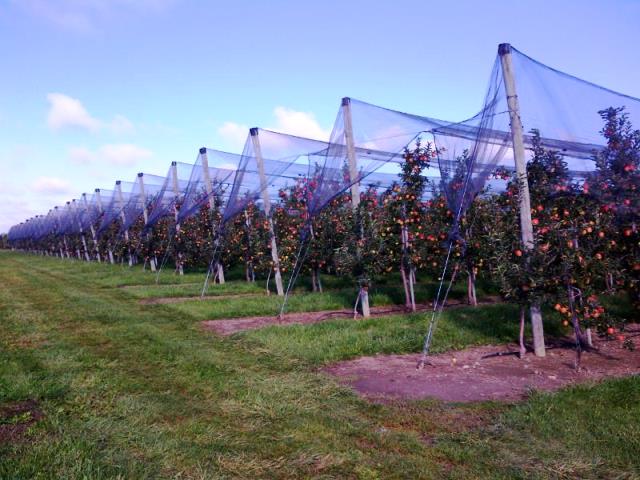 It’s easier for farmers to control the growth of the tree, and for light to reach the growing fruit amidst the branches and leaves, which will produce better apples. The trellis provides support for the tree to withstand wind and helps keep graft unions – the spot where trees are joined onto root stock – from breaking at the ground level.

More uniform trees will also give growers the option of mechanizing more of the apple growing process, such as using harvest platforms to pick fruit, or GPS-guided equipment in the orchard.

“Labour is getting more difficult to find and afford, so if we can make tasks in the orchard more similar, easier and repeatable, we can use more mechanization or even robotic picking or pruning in the future,” Fraser explains.

A trellis consists of two to five wires that are suspended between two anchor posts at either end of a row of trees in an orchard, with in-line posts spaced along the rows. The majority of Ontario apples are now grown using a trellis system in what the industry calls “high density orchards” because the trees are planted much more closely together. 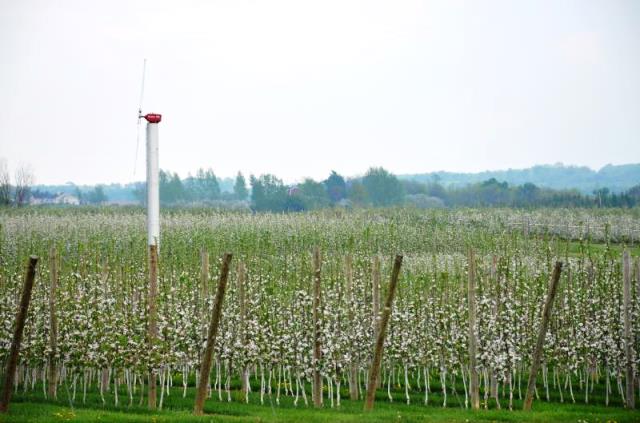 “More widespread use of trellises started here in the last 10 to 15 years, and there are no commercial orchards going in now without trellises,” says Fraser, adding that orchard rows now look more like tall, dense, two-dimensional “fruiting walls”.

Growers will put the trellis up almost immediately after they’ve planted new trees in their orchards. According to Fraser, every day that a new tree is unsupported is a day it can get wind battered, and it’s possible to lose a lot of production over the life of the orchard if that young tree is left without support for any length of time.

The only challenge for farmers can be finding enough of the wooden anchor posts with which to build the trellis. They can be in short supply; in Europe, some apple growers are now using reinforced concrete posts instead, although that’s a method that has yet to come to Canada.

“Trellises cost a lot of money so they have to be strong. And you need high yields – lots of high value, high quality apples – to justify the cost of putting them in,” Fraser says. “But having high value apples in turn lets you do other innovative things like using picking platforms or GPS technology or putting in irrigation systems or hail netting to help protect the trees and the crop from the weather.”